The study, now in its 17th year, measures customer satisfaction with the new-vehicle sales experience based on five factors (in order of importance): delivery process (23%); sales initiation (21%); deal (20%); dealer facility (19%); and salesperson (17%). Sales satisfaction is calculated on a 1,000-point scale.

In the luxury segment, the average discount per vehicle has increased to RMB 33,468 in 2016 from RMB 17,108 in 2014, and the average discount per vehicle in the mass market segment has increased to RMB 9,303 from RMB 7,316. However, overall sales satisfaction has decreased in both the luxury and mass market brand segments, presenting a significant challenge to the industry to balance between discounting and delivering a fulfilling sales experience.

“Despite these challenges, we believe tremendous opportunities exist for dealers to make an impact on the sales experience beyond focusing on discounting,” said Jason Jiang, general manager, auto sales and marketing at J.D. Power. “Personalized one-on-one services during and after the purchase are more likely to impress shoppers and maximize the value of a long-term relationship with customers.” For example, study findings show that in both the mass market and luxury segments, satisfaction is significantly higher among customers who say their salesperson made them “feel pleasant.”

Additionally, satisfaction increases by 54 points when the vehicle is delivered to the customer with a special ceremony. Other study findings show that vehicle performance is playing an increasingly important role in the purchase decision. For the first time in the study, performance is the third most influential reason new-vehicle shoppers choose a specific make and model, cited by 11% of customers in 2016, up from 6% in 2015.

Overall satisfaction among new-vehicle owners who were offered the option to choose a different test route during the test drive is 682, compared with 638 among those who were not offered a test route option.

Audi ranks highest among luxury brands in satisfaction with the new-vehicle sales experience for a fourth consecutive year, with a score of 751. This also marks the seventh consecutive year Audi has ranked highest in the study.1

The 2016 China Sales Satisfaction Index (SSI) Study is based on responses from 15,180 vehicle owners who purchased their new vehicle between May 2015 and February 2016. The study was fielded from November 2015 through April 2016.

J.D. Power has offices in Tokyo, Singapore, Beijing, Shanghai, Malaysia and Bangkok that conduct customer satisfaction research and provide consulting services in the automotive, information technology and finance industries in the Asia Pacific region. Together, the six offices bring the language of customer satisfaction to consumers and businesses in Australia, China, India, Indonesia, Japan, Malaysia, Philippines, Taiwan, Thailand and Vietnam. Information regarding J.D. Power and its products can be accessed through the Internet at asean-oceania.jdpower.com. About J.D. Power and Advertising/Promotional Rules www.jdpower.com/about-us/press-release-info 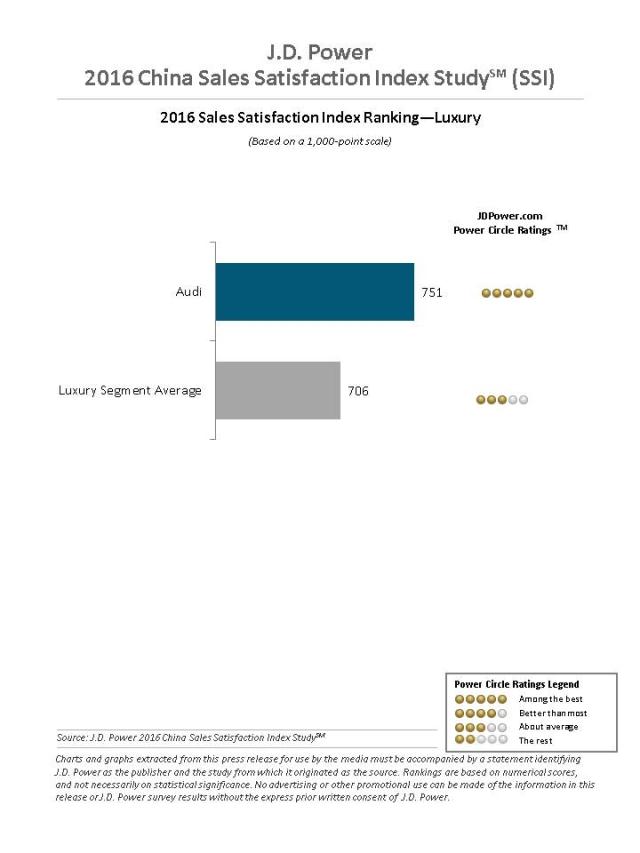 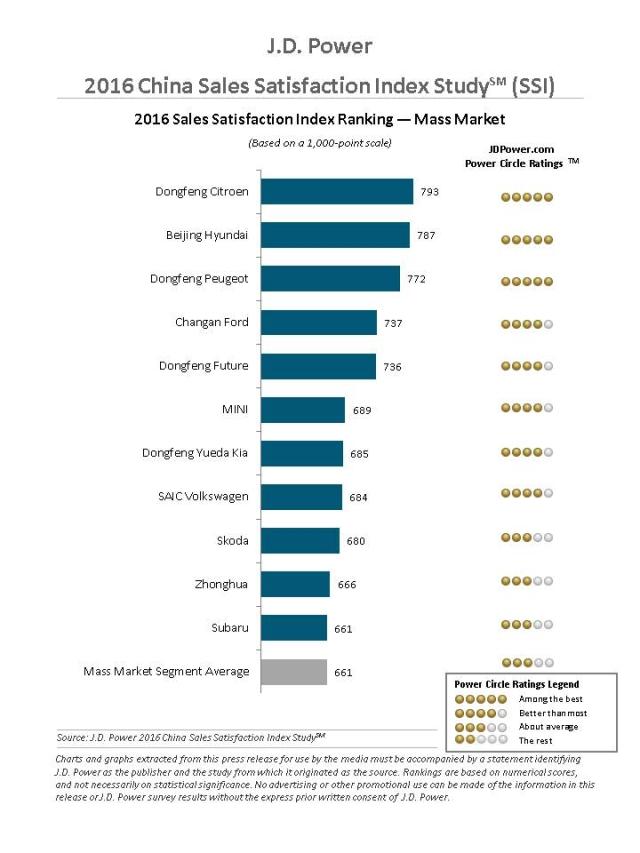