SHANGHAI: 1 Nov. 2017— Although the market share of SUVs continues to rise in China, their APEAL index is actually going down, and SUVs in China are gradually losing the edge against non-SUVs in soft quality, according to the J.D. Power 2017 China Automotive Performance, Execution and Layout (APEAL) Study,SM released today.

While the growth rate of passenger-vehicle sales in China is slowing down, the SUV boom continues. Its market share is expected to soar up to 43% by the end of this year, compared with 16% in 2011. [1] However, SUVs are becoming less appealing to consumers in China, compared with non-SUVs. In 2011, the APEAL index score for SUVs was 38 points higher (on a 1,000-point scale) than for non-SUVs, compared with only 1 point higher in 2017.

The study also finds that the small SUV segment performs lowest among the seven SUV segments across all 10 measurement categories of the study. Its only improvement was in fuel economy, up 9 points from last year.

“In a market flooded with numerous SUVs, manufacturers have not come up with enough differentiated products,” said Dr. Mei Songlin, Vice President and Managing Director at J.D. Power China. “Despite their affection for SUVs, consumers in China expect more and better experiences from the new vehicles they buy, especially regarding new technologies and intelligent functions. Our 2017 APEAL Study indicates that automakers in China need to increasingly compete with differentiated products to sustain growth and success in the SUV market.”

Porsche ranks highest in APEAL among luxury brands, with a score of 754. Land Rover (741) ranks second and Audi (731) ranks third.

FAW- Mazda ranks highest among mass market brands, with a score of 719, followed by Dongfeng Honda (714) and Dongfeng Yueda Kia (712).

The study, now in its 15th year, is based on evaluations from 23,933 owners of new vehicles purchased between September 2016 and May 2017. The study analyzes models in 22 vehicle segments and includes 251 different passenger-vehicle models from 68 different brands. The field work was conducted from March through July 2017 in 67 major cities across China.

J.D. Power is a global leader in consumer insights, advisory services and data and analytics. Those capabilities enable J.D. Power to help its clients drive customer satisfaction, growth and profitability. Established in 1968, J.D. Power is headquaJ.D. Powerrtered in Costa Mesa, California, and has offices in Shanghai, Beijing, Tokyo, Singapore, Malaysia and Bangkok serving the Asia Pacific region. J.D. Power is a portfolio company of XIO Group, a global alternative investments firm headquartered in London, and is led by its four founders: Athene Li, Joseph Pacini, Murphy Qiao and Carsten Geyer. For more information, please visit china.jdpower.com or stay connected with us on J.D. Power WeChat and Weibo. 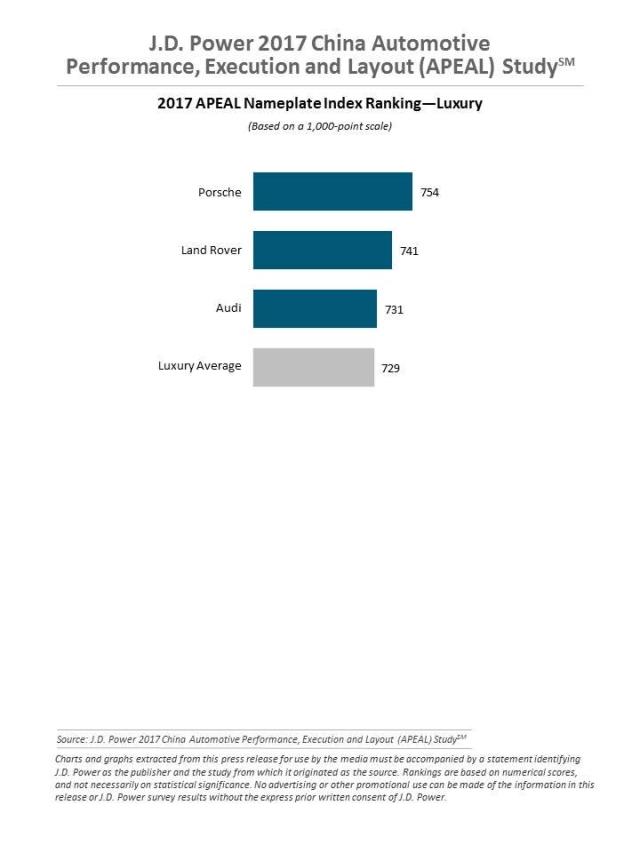 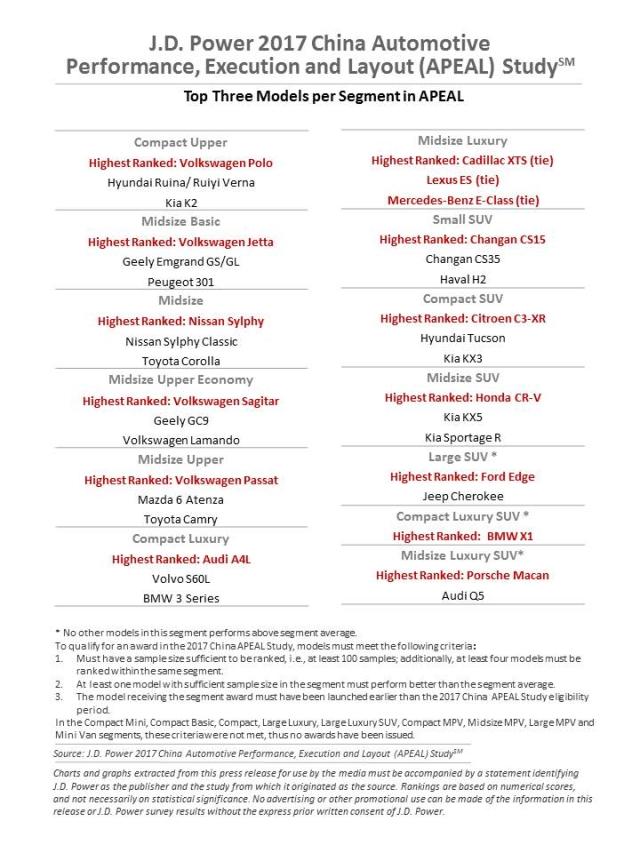