Electric Vehicles Made by China Startups Score Highest Among High-Appeal Models While International Automakers Improve the Most, J.D. Power Finds

The study examines NEV owners’ assessments of their new vehicles within the first two to six months of ownership. The data is used extensively by NEV manufacturers to design and develop more appealing models. In 2022, the average NEV-APEAL score for Chinese NEVs is 739 (on a 1,000-point scale). Compared with 2021, the average score has increased 4 points.

The study shows that NEV-APEAL satisfaction among owners of vehicles manufactured by Chinese startups in 2022 is 758, a significantly higher score than those of other manufacturers in each of 11 categories the study measures, including exterior, interior, performance, infotainment, driving range and charging experience. International automaker NEVs (744) have improved the most, increasing 10 points from 2021. However, domestic traditional automaker NEVs (731) perform relatively lower than the manufacturers in the other two categories.

“Product design is the main factor that customers consider when purchasing NEVs,” said Elvis Yang, general manager of auto product practice at J.D. Power China. “The reason Chinese startups are keeping their leading position in all aspects of vehicle appeal is not only their unique concept and approach to making vehicles but also their pursuit of product design and clear product positioning. In an era of aesthetics first, NEV manufacturers and brands need to understand their customers better, especially those in the next generation. J.D. Power data can help manufacturers better understand consumer preferences.”

Following are some key findings of the 2022 study

Models that rank highest in their respective segments are:

In the luxury PHEV segment, criteria for awards were not met, thus no awards are given this year in this segment.

The China New Energy Vehicle–Automotive Performance, Execution and Layout (NEV-APEAL) Study measures NEV owners’ emotional attachment to and level of excitement with their new vehicle across 45 attributes in 11 vehicle experience categories: exterior; setting up and starting; getting in and out; interior; performance; driving feel; keeping you safe; infotainment; driving comfort; fuel economy and driving range; and charging experience.

The study is based on responses from 5,686 new energy vehicle owners who purchased their vehicle between September 2021 and March 2022. The study includes 65 models from 36 different brands, among which 45 models have sufficient samples. The study was fielded from March through May 2022 in 56 cities across China.

J.D. Power is a global leader in consumer insights, advisory services and data and analytics. Those capabilities enable J.D. Power to help its clients drive customer satisfaction, growth and profitability. Established in 1968, J.D. Power has offices serving North America, Asia Pacific and Europe. For more information, please visit china.jdpower.com or stay connected with us on J.D. Power WeChat and Weibo. 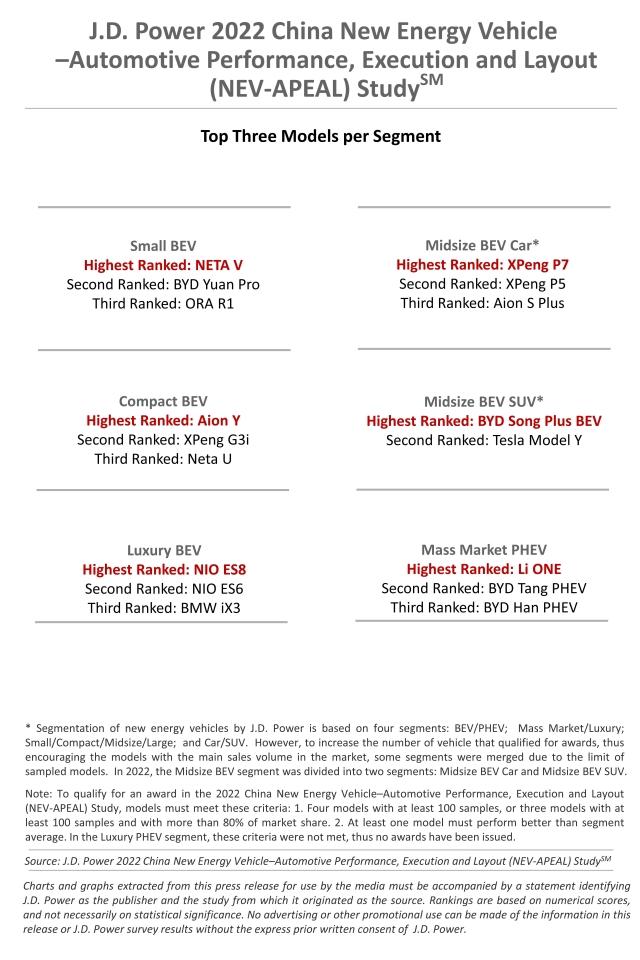