SHANGHAI: 28 July 2016 — Fewer customers say they “definitely would” revisit their service dealer for post-warranty maintenance and repairs despite the fact that service costs have remained stable, according to the J.D. Power 2016 China Customer Service Index (CSI) Study,SM released today.

The study, now in its 16th year, measures satisfaction among vehicle owners who have owned their vehicle between 12 and 36 months and who have visited an authorized dealer's service department for maintenance or repair work during the past six months. The 12- to 36-month-ownership time frame typically represents a substantial portion of the vehicle warranty period. The study examines five factors to determine overall customer satisfaction with dealer service (in order of importance): service quality (22%); vehicle pick-up (21%); service facility (20%); service advisor (18%); and service initiation (18%). The satisfaction score measures the performance of authorized dealers in meeting customers' expectations of their after-sales service experience. Satisfaction is measured on a 1,000-point scale.

Only 22% of customers in the mass market segment and 34% of customers in the luxury segment in 2016 say they “definitely would” revisit their service dealer for post-warranty services, a decrease from 34% and 44%, respectively, in 2015. Additionally, customers are visiting their authorized dealer less often this year. On average, vehicle owners in 2016 have visited their dealership 2.9 times in the previous 12 months, down from 3.4 in 2015. Customers tend to think the price they received at authorized dealers is not reasonable enough. Customers’ perception of servicing costs to be reasonable has decreased to 87% in 2016 from 94% in 2015. However, the study finds that maintenance service costs at authorized dealerships have remained fairly stable (RMB 660 in 2016 vs. RMB 642 in 2015).

“Clearly, there is a gap between customers’ perceptions of price reasonableness and actual price paid, which significantly impacts loyalty and advocacy,” said Frank Hu, general manager, auto service and loyalty at J.D. Power China. “Authorized dealers need to put more effort into turning around customers’ perceptions, especially when those perceptions contradict the actual facts, in order to gain customers’ trust and long-term loyalty.”

Hu noted that the service advisor plays a critical role in the dealer-customer relationship. “Explaining costs as well advising the customers on the services they need, even recommending additional services skillfully when necessary, are critical to nurturing trust and improving satisfaction,” said Hu. “Authorized dealers need to make sure their customers are willing to return throughout their ownership life cycle.”

The study finds that customers in China are significantly more satisfied when the dealership provides a price estimate prior to service, compared to when such estimate is not provided (687 vs. 613, respectively), and when they receive an explanation of  the charges after service is completed (687 vs. 606).

Audi ranks highest among luxury brands, with a score of 815. In the mass market segment, Dongfeng Citroën (814) ranks highest, followed by Dongfeng Peugeot (806) and Beijing Hyundai (786).

The 2016 China Customer Service Index (CSI) Study, which examines 74 passenger vehicle brands, is based on street intercept and face-to-face interviews with 18,577 new-vehicle owners who purchased their vehicle between October 2012 and May 2015. The study was fielded between October 2015 and May 2016 in 57 major cities in China. 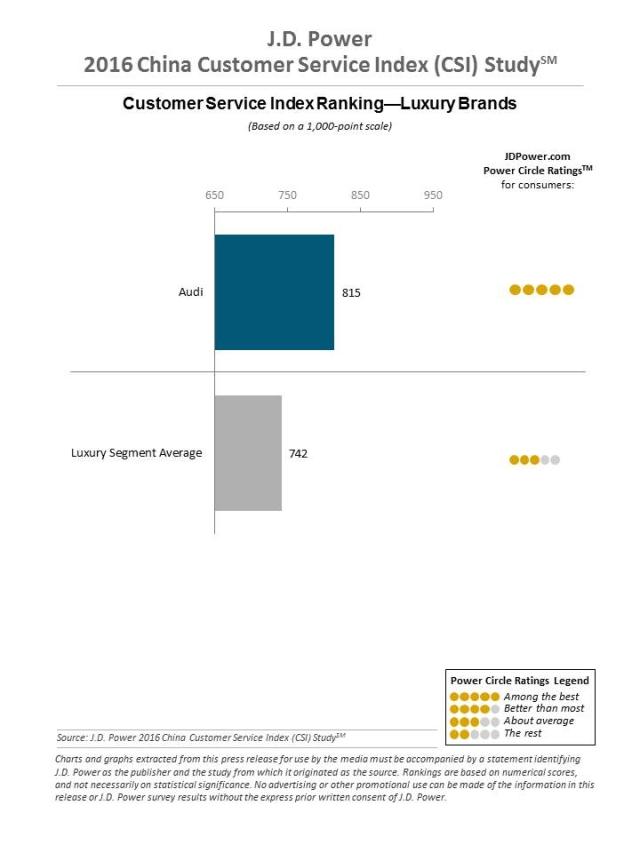 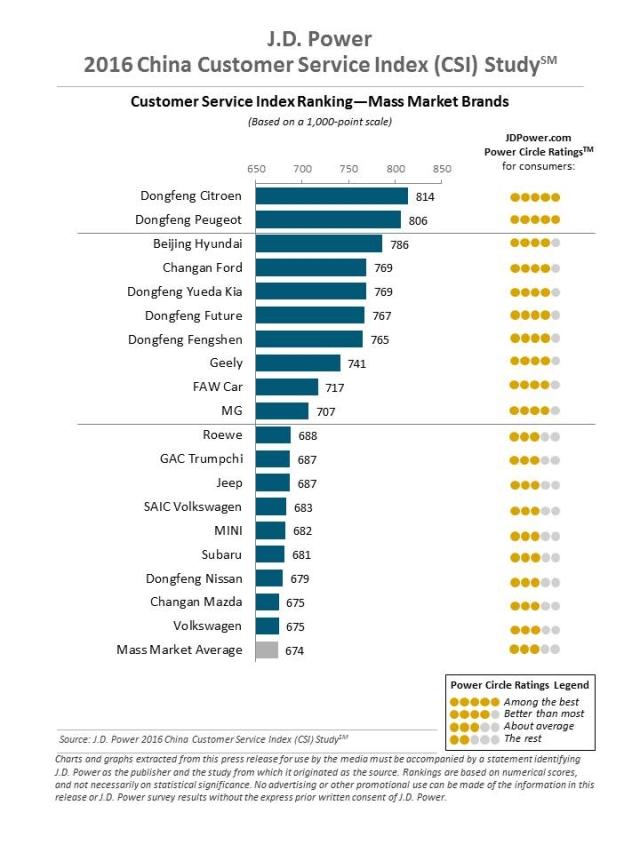